LIGHTS OUT?
So looks like I'm in trouble again. I recently read the story in the Somerset County Gazette about the Councils decision to deny Taunton Town Centre and its shoppers Christmas lights this year.

I was absolutely disgusted by this and added my comments to their story online basically saying that the Council should get rid of all the planners and allow ordinary properties and listed properties to develop to create more employment. Perhaps they might also consider spending the £10 million which they got from the Government for the potholes on developing J25A dual carriage way to the bottom of Thornfalcon Hill.

This would help businesses new and old to pay rates and taxes and put Council in funds so that they can turn the lights on!

Unfortunately the paper disagreed with me and took my comments down. 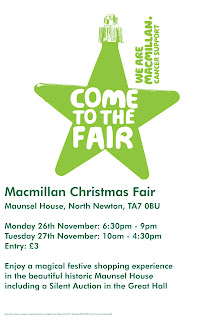 Even if Taunton County Council is not feeling the festive spirit, there will be buckets of it at Maunsel at this special event. You’ll have plenty of gifts to choose from and lots of fun whilst doing your shopping.

HEDDA GABLER
If you have seen the Daily Mail recently you would see that I have invested £250,000 into a film project that is to be shot at Maunsel House.

This film has come about because last year I had two aged, evil, desperate, old Hedda Gablers who tried to get me shot and locked up under a section 136 by basically telling the Police that I was Raoul Moat.

I decided that Ibsen’s play about a young women who stole other people’s husbands and ended up driving her husband to suicide and then eventually shooting herself was very appropriate because it all happened here in real life.

I am co-producing it and handling the press and I want to star as Judge Brack and I could also play the man who fires his pistols in the Opium den.  Unfortunately my 1807 black powder pistols have been confiscated by Avon & Somerset Police along with my de-activated Mouser pistol and my 1859 Purdy shotgun which is also de-activated.  These weapons would be ideal for the movie and save us the cost of hiring an armourer.  Gun shots can be replicated on film and there will be a bottle of tomato ketchup handy for all the blood.

£60,000 is being spent on satin clothes for the ladies and I am having two new costumes myself.

Many celebrities will be beating a path to our door for many of the launch parties that we are having. Also the team are brilliant and we are shooting it in a very technically advanced way so hopefully we should win a lot of awards.  I hope to be on the red carpet alongside Matthew John, Co Director, who has all the technical qualifications for producing this movie.